Inicio > Care in the second trimester of pregnancy

Care in the second trimester of pregnancy 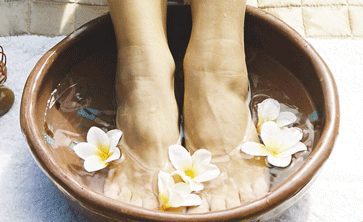 Care in the second trimester of pregnancy: swollen feet, anemia and allergies. How to treat them?

They come from the increase of fluids in the body by the hormones and they swell more in hot environments, with much humidity, or by being stopped by long rats.

If fluid retention is excessive and extends to the face, neck and hands, you should tell the doctor immediately, because it may be the onset of a hypertensive disorder of pregnancy.

It is advisable to rest in a horizontal position with your feet elevated at least 15 centimeters above the level of the rest of your body or raise your legs to 90 degrees, leaning against the wall. Also, do not stand too long, wear comfortable shoes (not high heels), put low salt at meals and moderate exercise.

It is also useful to take alternate baths of cold and hot water, ending with cold; Massage your feet dry with a horsehair glove and apply cool creams.

It is the decreased ability of red blood cells to transport oxygen or iron, due to an increase in blood volume. If left untreated, it can cause poor fetal growth, premature birth and a low birth weight baby.

Usually, if it is not severe, the woman has no symptoms or can confuse them with others such as tachycardia, fatigue, vertigo or dizziness. That is why, to detect and treat it, among the care in the second trimester of pregnancy, blood tests are done. The doctor usually prescribes an iron supplement.

There are no specific allergies during pregnancy, but preexisting conditions may improve, do not change, or worsen. They are not risky for the baby, except that they are more likely to have them. They involve controlled medical treatment, especially when it comes to bronchial asthma.

They should not be confused with the rhinitis of the pregnancy, caused by the increase of estrogen that generates pressure in the blood flow on the membranes of the nose, causing swelling, dryness and until bleeding.

It is normal, among the care in the second trimester of pregnancy, for the increase and rapid pumping of the blood and because the blood pressure rises and falls during the pregnancy. They are worrisome if accompanied by a severe headache, alterations in the vision or numbness and tingling; Then you should contact the doctor immediately to rule out other more serious problems.

To avoid them, it is suggested not to get up quickly, to eat and drink enough and not to go to places that are too hot or too crowded.

It occurs when the placenta is placed in the lower part of the uterus, so that it partially or totally blocks the cervix. This usually makes natural delivery impossible because it prevents the baby from leaving or causes bleeding. Its symptoms, to be taken into account in the second trimester of pregnancy, are sudden vaginal bleeding, almost always without pain, and from week 24; Is detected by ultrasound. It usually involves absolute rest, and often cesarean section.

It is an increase in blood pressure during pregnancy, potentially dangerous for mother and child, but if detected early, it can be controlled and decreased. Its exact cause is not known, but it could be the vitamin deficiency or a genetic link, whereby to defect in the placenta restricts the flow of blood to the baby.

If left untreated, it causes liver, kidney, and blood clotting disorders in the mother, causing complications that threaten her and her child’s life.

Symptoms in the early stages of pregnancy include frequent and prolonged headaches, swelling of the hands, wrists, face and / or ankles, sudden weight gain, decreased urination. In the later stages are acute pain under the ribs, usually on the right side, vomiting, blurred vision, irritability and vertigo.

Any of these symptoms are prominent among the care in the second trimester of pregnancy and warrant that you go to the doctor immediately, as this disease is treated intrahospital and can lead to a premature birth.

Tingling and pain in the hands

The cause of these sensations may be a carpal tunnel syndrome, although this ailment is associated with jobs that require repetitive manual movements because weight gain and fluid retention during pregnancy press the carpal tunnel, which is the conduit through which they pass The nerves that go from the hand to the fingers.

Symptoms can extend to the wrist, arm and even the shoulder. In severe chronic cases, the hand feels clumsy or weak. It is recommended to wear a wristband, have an ergonomic computer keyboard and maintain a ditto posture. The doctor will prescribe anti-inflammatories.