Inicio > Diseases during lactation in the mother

Diseases during lactation in the mother 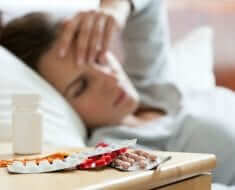 Mastitis, flu, varicose veins in the legs and chickenpox are some of the diseases that occur in the mother during lactation. Learn how to handle them here.

It is the most frequent disease in lactating women, but it is preventable. Breasts should be prepared during the nine months of pregnancy; From the moment it is confirmed, you have to start using natural emollients, moisturizing oils or creams around the areola; Also use gloves of horsehair or scourers that along with the soaps will help to remove the dead cells, softening and changing the texture of the skin of that sector of the body that during the pregnancy is dried and thickens.

Another way to avoid mastitis is exposing the breasts to the sun, providing the moments when you put the baby to receive vitamin D and avoid jaundice.

When the breasts have not been prepared, the baby’s saliva and constant moisture begin to generate cracks that trigger mastitis. As soon as there is inflammation in any of the breasts, you should consult a specialist because this disease is accompanied by high fever, generalized malaise and abscesses. Sometimes it is necessary to drain the area and provide antibiotics.

Mastitis can be controlled at home; When there is not much pain, it is recommended to put compresses of cold and warm water in turn to deflate the area. But when it is complicated with constant and very high fever, you should go to the emergency department and a hospitalization is likely.

Breastfeeding should continue with the breast that is healthy. Anyway, the affected breast should be followed by milking and the milk must be discarded.

Breastfeeding mothers who have the flu should continue breastfeeding, as this condition is just a viral disease, in addition because the baby through the breast milk is receiving immunoglobulin that will defend against the flu that suffers the mother. If she has a lot of cough or nasal congestion she should use masks.

Varices in the legs

Varicose veins can occur due to the changes associated with gestation, especially if there are genetic factors and more if you have had children. The sedentarism increases its probability and severity, reason why short walks are recommended throughout the pregnancy and during the period of lactation.

It is unusual for the women who are breastfeeding to give chickenpox. If there are blisters on the skin with fever suggesting the presence of chickenpox, breast-feeding should be discontinued and a medical center urgently needed.

The most effective way to prevent mastitis is to properly drain breast milk, either with baby’s suction, manual drainage or assisted with suctioning devices designed for this purpose. This drainage should be done alternately, between both breasts.

The most frequent cause of mastitis is the retention of milk that occurs when a woman is afraid to breastfeed because it hurts her or when the baby is separated from her (for example, due to illness).