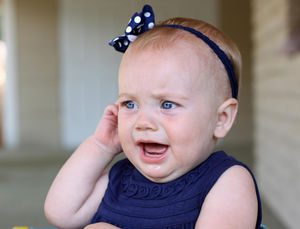 Keep them healthy with proper hygiene.

When children pull their ears often it happens because they have discomfort from the rash generated by the normal mobilization of the ear wax. It is normal for them to do this because they do not have the fine motor skills to stick their little finger and scratch themselves. Therefore, it is best to keep the child’s ears clean.

Copies with cotton serve only if the wax has already come out, so most of what they do is push it in. The ideal cleaning is done by applying in each ear a drop of carbonated glycerin whose bottle is rubbed in the hands to warm the contents. Glycerin softens the wax, allows it to move and leave. The procedure should be repeated three times a day for three days, each month.

In some extreme cases of wax plugs that are too large for not cleaning, it is necessary to go to the otorrino to perform a washing of ears.

It is false that pulling on the ears causes children to become dried-up. They can do it to play and the elongation (elongation) of the lobe will occur only if they pull it permanently. If you are worried about your child, give her an attractive and useful object so she can hold her hands.

When your child complains that his ear hurts or feels clogged, he probably has otitis, an infection caused by water left in the ear or by milk (it passes from the mouth through the ear canal to the ear, Usually when taking a bottle lying down).

The otitis warrants an examination and treatment, so that before your suspicion you have to go immediately to the pediatrician. In the meantime, you can relieve the pain with acetaminophen in the dosage for the age of your little one and you must avoid to put anything in the ear.

The doctor probably prescribes ear drops, which should be well applied to be effective: with your child lying on one side, one by one to flow and the air escape, and leaving your child in that position for two or three minutes to Ensure that the droplets reach the deepest of the ear canal.