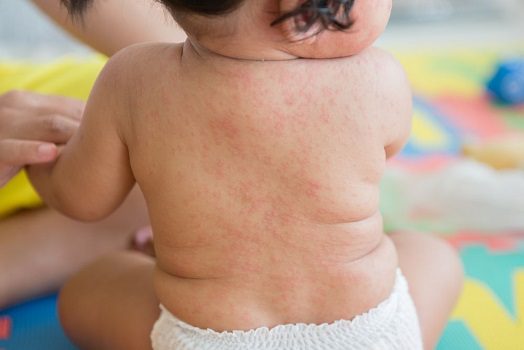 Meningitis in babies, what it is, transmits, symptoms, treatment, vaccines

It is an infection that affects the meninges that cover the brain producing damage in the central nervous system. They can cause death or cause neurological sequelae (deafness, paralysis, etc.).

Meningitis is produced by different microorganisms: bacteria, viruses, fungi and parasites. Among the bacteria, the most frequent are Haemophilus influenzae b, Neisseria meningitidis (Meningococcus), Streptococcus pneumoniae (Pneumococcus) and in the newborn: Streptococcus agalactiae, Listeria monocytogenes and E coli.

Mycobacterium tuberculosis can produce meningitis at any age but more frequently in young children.

Viral infections by enteroviruses are frequent in the temperate and Herpes virus affects mainly in the first year of life. The mumps virus decreased its frequency thanks to the vaccination. Fungi and parasites are very rare causes.

How is meningitis transmitted in babies?

Bacterial meningitis is transmitted through the respiratory tract from a sick person or from asymptomatic carriers in the nasopharynx through coughing, sneezing, kissing and also sharing utensils.

Enterovirus infections are transmitted by the respiratory and oral fecal routes.

Neonatal herpes virus is transmitted primarily at the time of birth.

What are the symptoms of meningitis in babies?

The symptoms are variable according to the age and can be quite non-specific, depending on the time of evolution of the disease at the time of the initial consultation and the patient’s response to the infection.

In newborns it can be started only with the presence of fever. In older patients, headache, vomiting, nuchal rigidity, hypertensive fontanelle, photophobia, sensorineural depression and seizures may occur depending on the time of evolution. Skin lesions (petechiae) may occur in some meningitis.

Early consultation and early diagnosis are the fundamental tools for healing without sequelae and prevent its spread.

What is the treatment of meningitis in babies?

It is important that in the face of the onset of signs or symptoms the consultation should be performed as soon as possible since the response to treatment is related to the promptness in making the diagnosis and the beginning of the same.

Does having meningitis make a person immune?

With the exception of meningitis due to mumps virus that leaves permanent immunity, the rest of the meningitis given the diversity of microorganisms and the different serotypes can be repeated.

How can meningitis be prevented in babies?

The prevention of meningitis is done through specific immunization from the first months of life. Other less specific measures are equally important, such as frequent handwashing to avoid exposure to infectious agents especially before eating and after being in public places. Overcrowding should also be avoided, favoring the ventilation of public spaces, classrooms and day care centers.

* Taken from the Argentine Society of Pediatrics.