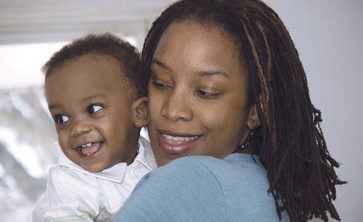 The second year is one of the richest stages in language development.

Between 12 and 18 months, children continue to enrich the combination of sounds, using direct, inverse and some complex syllables. They continue to learn sounds characteristic of their language, which translates into new words that represent the globality of a situation and are often accompanied by mimics and intonation.

As they are learning, their words are not the same as those of an adult: they omit syllables, fuse several words and even create some, which makes them understood by the closest people. Chewing new foods, sliced ​​and soft meats, continues to favor the development of articulation of the sounds that make up the language.

After 18 months, the use of merged words decreases and increases the production of two words coordinated with each other: one is more stable and persists, the other varies according to needs; For example, “I want to tete”, “I want Mom”.

At that stage your little one combines verbal elements to identify objects and express location and possession, in phrases like “eto e miau” to say “this is a cat”; “Nena tá casa” (the baby is in the house) and “guauguau nené” (the dog is from the baby). Some functions of language are also evident, such as the instrumental (satisfies their needs with speech) and interactive (it understands social norms like greetings and farewells).

At age two, he pronounces his words similar to the adult and his sentences have a more complex structure, since it incorporates prepositions, gender and number, relations of possession and location, among others. He also uses irregular verbs conjugated regularly (“put”), which denotes the use of rules in the structure of the sentence in the new vocabulary.

Gradually he understands prayers following the order of words and organizes them into the sentence. His comprehension continues to increase, he understands sentences by differentiating the nuances of voice and he needs less the gesture of the adult. When playing, oral language accompanies its activities, regardless of whether or not an object exists.

From the age of 18 months, it includes in its diet a greater diversity of raw meats and vegetables, which positively influences the strength of its orofacial muscles and the dissociation of the movements of the structures involved in food and speech. Different experiences in socialization, food, travel and routines, among others, favor the acquisition and use of different words.