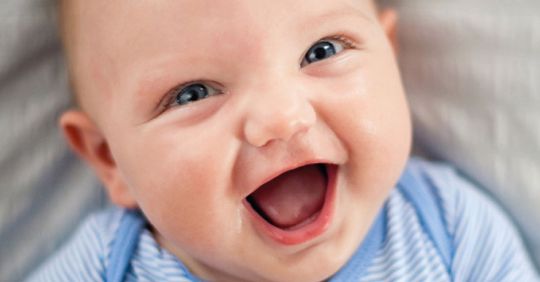 Babbling represents a way to communicate with the environment, especially with the mother learn to interpret them!

At birth, your baby maintains a constant communication with the environment, which is most evident in the mother interaction. In breastfeeding, for example, your baby develops the reflex and learns to coordinate innate functions such as sucking, swallowing and breathing; Actions in which an important muscular action intervenes that will be the precursor of the development of the speech.

In these first months, the cry, the laughter and the tears, are carriers of meaning or messages that you learn to identify as states of comfort or discomfort, characterized by intensity, timbre and intonation. They are also part of the communicative process, the voices, their different intonations, the gestures of the mother and the people who live with the baby.

Remember that with each exposure to different auditory, tactile, visual, olfactory and gustatory stimuli, among others, your baby will specialize in sensations and movements, especially those in the mouth.

From the second month on, your baby will reduce the use of crying and crying as a basis for his or her communication and initiates ‘laleo’ or vocal play, mainly when it is calm, characterized by the repetitive use of vowel sounds that are then combined with guttural sounds .

At this same time your baby tries to mimic the movements of Mom’s mouth and produces similar sounds. The vocal game is quickly enriched and includes other consonant sounds. After six months, the number of vocal productions grows and your child reproduces new sounds heard. It is common to make reduplications of syllables like ‘ma ma ma’ or ‘pa pa pa’ without pronouncing a word itself.

In this period your child begins to acquire the representativeness of some words linked basically to physiological interests (play, sleep routines, hygiene, food). In the same way, it includes some words that characterize a certain context. Finally, it incorporates sounds belonging to its language and discards those that are not part of its phonetics.